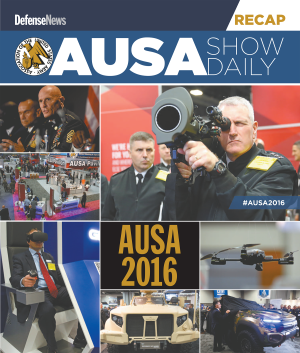 For three days, more than 26,000 attendees from nearly 60 countries heard a clear Army message that readiness for today’s missions remains the No. 1 priority, and that more attention is required to ensure the Army is sufficiently organized, trained and modernized so as to maintain technological advantage over any potential future adversary. Doing so will require innovative approaches by the Army and the diverse industry partners supporting it. It will also require adequate, sustained, predictable funding by the Congress.

Army leaders reaffirmed the force is, and will remain, strong. “Our enemies need to know these colors don’t run from tough fights,” Army Chief of Staff Gen. Mark A. Milley said. “We will adapt, and we will evolve. In the end, we will win.” He predicted fundamental changes in organization, weapons and doctrine including when, where and how soldiers fight.

Under Milley’s command, the Army has made great strides in rebuilding the Regular Army, Army National Guard and Army Reserve team. That is an important step, but it won’t be enough for the future. Wider cooperation among the services and among multinational partners is increasingly important as potential battlefields extend beyond land, sea or in the air across all domains at once, including space and cyberspace.

Gen. David Perkins, the Army’s Training and Doctrine Command commanding general, made this point during our meeting in a discussion that involved Air Force, Navy and Marine Corps leaders as well as foreign military representatives. “Lines are blurring between those domains,” Perkins said, noting a critical need for the services to help each other in areas where they have strengths. A prime example, he said, is for the Army to develop an anti-ship projectile that could be fired from a land-based battery in support of the Navy.

Our Army needs to modernize, not just for multidomain capabilities but to remain ahead of potential enemies. Dramatic technological advances were on exhibit during our meeting and showcased some of what is available, but it takes money and a less cumbersome acquisition process to move ahead.

“We must make sure our Army is so fierce that nobody wants to fight us and if they do, they lose,” said Secretary of the Amy Eric Fanning.

Our Annual Meeting and Exposition provided a platform for this professional development forum focused on the Army’s highest priorities. It also gave unmatched opportunities for soldiers, Army civilians, Army families and others to hear directly from senior leaders. Participation by hundreds of exhibitors allowed the Army to see firsthand the emerging technologies and capabilities available to maintain the fighting edge, and also enabled the Army to convey its developing requirements to industry partners.

We at AUSA also feel honored to host the Army’s “family reunion,” where generations of America’s soldiers— from the Regular Army, Army National Guard and Army Reserve— gather to strengthen the bonds that only soldiers can fully understand and enjoy. One such moment was the culminating event, when retired Gen. Gordon R. Sullivan was presented our highest award, the General George Catlett Marshall Medal, for his more than 50 years of service to our nation.

The 2016 Annual Meeting was my first one as president of the Association of the U.S. Army, and I could not have been more proud of this year’s event. The amazing team at AUSA, our national headquarters and the incredible volunteer leaders across our association made this a truly memorable event. We take very seriously our dual missions: Voice for the Army; Support for Soldiers.

I am honored to have this opportunity to serve, and we are already planning for next year’s Annual Meeting, Oct. 9 to 11, 2017. I look forward to seeing you there.